Today, I took one of those mini-personality quizzes based on The Four Tendencies.  My kids had told me about this quiz and the book that is of the same name.  My tendency is apparently an obliger, which means that I tend to put other people’s needs before my own.  This can be fine, but it also suggests that my own needs become secondary and therefore might go unattended.  This sounds fairly close to reality for me. I will work very hard to help others reach their goals, but often put my goals on the back burner. I have a tendency “to struggle with my own expectations,” according to author Gretchen Rubin.  The good news is that I tend to be “a pillar of society,” and “excel at meeting external demands and deadlines.”  Apparently, people of this personality type are “terrific colleagues, leaders, family members, and friends.”

The big problem is Obligers can procrastinate on their own projects since they are so externally focused on other people’s and then feel dissatisfied with their lack of progress regarding their personal goals. I hate to jump right on the bandwagon, but I must admit this does describe an area in my life where I clearly need some help.

The recommended remedy?  Enlist the aid of others to create real deadlines so an Obliger’s personal work gets accomplished.  This is probably one reason why I have consistently blogged over the past several years (except for a recent brief hiatus). My thought was that if even one person was expecting to read my blog, then it was my job to produce it. I wouldn’t want to disappoint anyone who might have an expectation that it was going to appear daily.  After all, my job is to oblige, right? This has helped me stay on track since 2011.

I see that I need to expand that expectation to my other writing.  Recently, I made a pact with a fellow writer that we would submit at least one piece of writing a week to a major literary journal.  So far, I’ve made good on that promise and so has she.  I will do this because I made a promise I want to keep and, besides, she is checking in every week to make sure I do what I said.  I am doing the same for her.

I clearly need some help with my novel in this regard.  I said to one of my writing group members that I was going to submit my novel to a few literary agents and just see what happens.  Now that I have said I will do that, I feel obliged to make it happen.  I just need to make a few tweaks to the first chapter and then I’ll submit, for better or worse.  After all, I said I would and I take my word pretty seriously.

I have not read beyond what I have recounted to you on The Four Tendencies, but I can see at least some value in that thought process.  The other tendencies, by the way, are questioners, upholders and rebels. If you want to take the free quiz online, you can find it at:

Whether this is Pop Psychology or not, there is some basis of truth in it. I have learned one thing that is true for me today, at least. If I enlist the aid of others to help me reach my goals, I have a higher probability of reaching them. That jibes with my life experience, which is good enough for me.

Hope you’re having a good evening.  I’ll be checking back in with you tomorrow.  I will because I said I would. 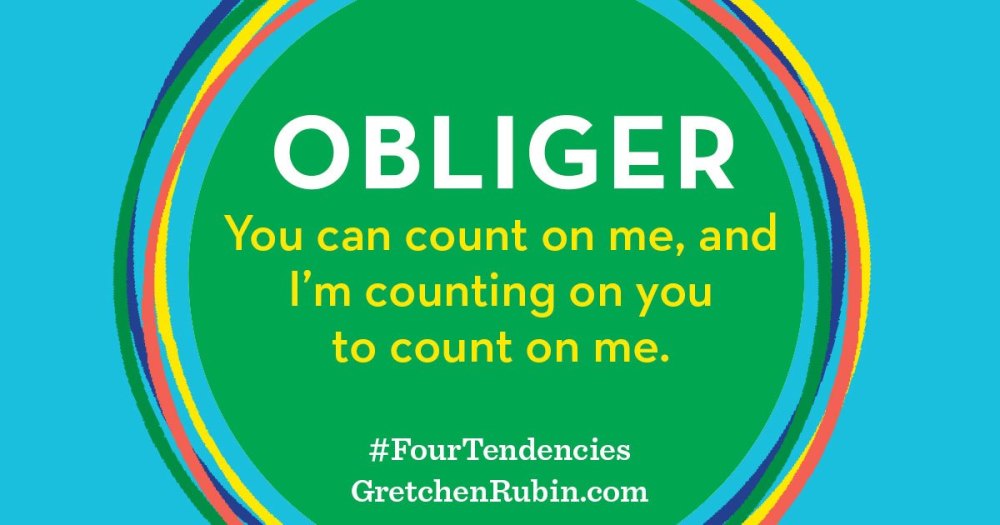