Ray and I just returned from a trip to Mississippi to attend the memorial service for my first cousin, Dr. Jack Hammonds White, who died in June. Jack’s lovely and gracious wife, Emilie, has been preparing for this memorial over the past several weeks and, with the aid of their parish priest, the Very Reverand Anne Harris at St. Paul’s Episcopal Church in Columbus, MS, they had a moving and meaningful service.  Jack was a singular human being, filled with passion and love for both life and learning.  He had a long and illustrious career as a college professor of English Literature as well as Director Emeritus of the University Honor’s program at Mississippi State in Starkville, MS. He received numerous honors over the years for his advocacy and innovation when it came to providing the best educational opportunities available for his students.  Here is a link to his obituary for any who would like to see his very impressive lists of accomplishments, which are too numerous to mention here:  http://www.cdispatch.com/obituaries/obit.asp?id=22285#.W3uhP5NKj-Z

As is the case with memorial services, I had the opportunity to see several relatives I have not had the chance to visit with in many years.  These included my first cousin, Claude Leatherwood, and his wife, Laura, from Houston as well as my first cousin once removed, Michael Maples and his wife, Lynne, from Arlington, Virginia.  I also had a chance to see my little brother Sam and his partner, Jaime, from Nashville along with my first cousin Lee Leatherwood and his wife, Elaine, who live in Austin. This was all quite a treat since I can never see these folks often enough.

Getting to see Mike Maples, who I haven’t laid eyes on since around 1971 was especially wonderful.  I met his wife for the first time and Ray and I sat for several hours with them and shared stories about our kids and our lives.  It was as though I’d seen Mike only a few weeks back rather than well over forty years ago. We also exchanged lots of information about our family history since Mike has devoted a fair amount of time to learn more about the Leatherwoods since his retirement.  I am hopeful that now that several of us cousins have reunited, we’ll make the effort to see each other more often.  I certainly hope so.

I also enjoyed spending time at Emilie and Jack’s lovely home in Columbus. Emilie is the quintessential hostess, able to keep everyone happy who is visiting while taking time to privately talk with each of her guests so they feel special.  She told me that she wanted me to know how much Jack had benefitted from knowing my mother. “Jack always credited Aunt Helen with igniting his intellectual curiosity,” Emile told me.  My mother was getting her Master’s degree in Sociology and her Ph.D. in Psychology when Jack was at a formative age. Emile told me that my mother gave Jack books to read and he would come back to her and discuss what he’d read. According to Emilie, Jack always felt that Mom’s encouragement was what fostered his own academic and intellectual pursuits. Of course, it was wonderful to hear such a sweet tribute to my mother. She did have a way of encouraging others to stretch and grow intellectually just as she was doing herself.

I am very happy Ray and I had the opportunity to travel to Mississippi for this important event to commemorate Jack’s life.  Jack was a close friend to all my older siblings: Leslie, John and Jim, plus also knew and loved George and Sam.  I have always thought of him as more brother than cousin so there was never any question we would be going to pay our respects to Emilie, his wife of 49 years.

The women of the church outdid themselves with a variety of tea sandwiches, cheeses and crackers, along with homemade cookies and other sweets.  The food was delicious.  I could feel the love emanating throughout the reception hall, which was a wonderful tribute to Jack and Emilie’s loving, generous spirits.

May light perpetual shine upon Jack’s soul and may Emilie be surrounded with white healing light as she continues to live a rich and full life in her community.

Here are a few photos of the reception at St. Paul’s.

My brother Sam and Jaime Schneider, his life partner, with Emilie White 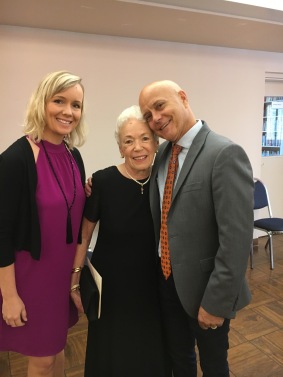 My cousin Claude Leatherwood and his wife, Laura, with Emilie White 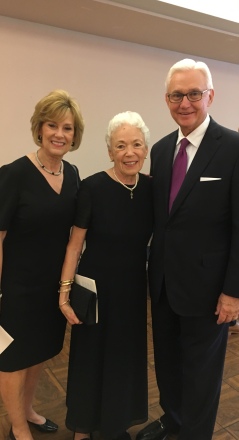 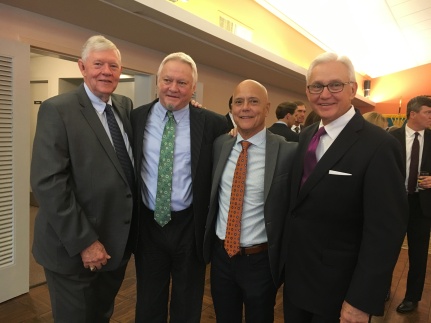 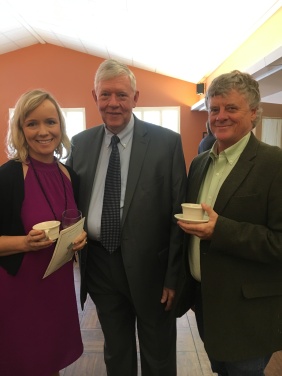