My husband Ray contacted a high school friend a few days back.  They discussed getting together and his friend, Scott, said he would be working at a skydiving center over the weekend in Whitewright.  Whitewright?  This is a tiny town about 30 miles from Sherman, whose last claim to fame, as I recall, was hosting a monthly very small flea market. Ray told Scott we’d come out to see him and Scott said, “Why don’t you two do a tandem jump while you’re there?” Ray’s response: “I probably won’t, but I think that might be right up my wife’s alley.”  I immediately said, “Yes!” and within a few minutes, Ray said, “Well, I’ll do it too.” Hence our impromptu plan to go skydiving today.

I made a list a few weeks back that I posted on my blog of things I’d like to do before I die. I was just allowing myself to dream a little.  What would I do if I had the opportunity? After listing things that I always knew I wanted to do, like riding a motorcycle up the CA coast or scuba diving, I surprised myself by writing in skydiving. Though not at the top of my list, it was indeed there, and, yes, given the chance, I would definitely want to experience floating through the air suspended from a parachute.

Well, today was the day.  As we drove out to the location for the jump, Ray and I told each other the location of our secret caches of cash.  (Not that much, but you don’t want some random box getting tossed with money inside.)  Ray also reminded me of where various keys were stored in case I needed to find them. I got a little teary-eyed at the prospect that something could happen to him.  Funny, I wasn’t worried about me at that point, but I thought how sad I’d be if things didn’t go well for him.  At that point, we texted the kids.  Their reaction was a “What???” to “Oh, that’s cool.” to “Are you scared?  I’m scared for you!” We promised to keep them involved in the whole process for as long as we could.

The place was quite upscale even if it was down a dirt road about ten miles south of Whitewright.  All the people who worked there were dressed in hip tee shirts and tights and they were all upbeat.  The customers (Ray and I being two) all seemed happy/excited/nervous as they (we) waited to attempt something that was not small – as in jumping out of an airplane at 14,000 feet. We met Ray’s friend Scott, who was extremely nice and said he’d jump with us, taking video of Ray’s jump with a GoPro. Scott is an experienced jumper who has been working in the skydiving business for several years now and says he’s never been happier.  About this time, our group of tandem jumpers were called for our training session.

First, we watched a video that warned us of all the dangers of skydiving.  The owner of the company, who had one of those long mountain man beards, reminded us via the video that we’d just signed waivers that meant we couldn’t sue the company for undertaking a life-threatening activity.  I immediately considered what might happen if I broke my leg since my medical insurance is with Kaiser Permanente, which is primarily located in California.  But, what the heck?  We were on our way.  Second, we had a very nice woman tell us everything we needed to do from dressing in our jumpsuits to arching while diving to paying our tandem instructor a non-mandatory tip after our jump debriefing.  We got dressed in our jumpsuits, then were introduced to our tandem instructors.  Mine was Ashley, a pretty mid-twenties young woman with a tattoo or two on her arms and a streak of red in her hair.  She told me she’d done 6 jumps already for the day and was excited to jump with me.  Lucky 7! Ashley reiterated everything the first woman had said, then dressed me in my harness and goggles.  She was calm and professional.  After grabbing her helmet ( we didn’t wear one), we headed for the plane with the other members of our group.

We straddled a bench in the plane and after getting airborne, Ashley and the other instructors harnessed themselves to us and also went over our instructions. Ashley was great because she also pointed out an old lime quarry on the ground – “Isn’t it beautiful?” and told me that we’d jump above the clouds and then skydive through them, which was cool. I appreciated her relaxed banter.  It helped me to stay calm.  Once we reached 1400 feet, everybody started scooting towards the open door. I watched several people jump before Ray and his instructor got there.  I felt a heart-stopping pang watching my husband leap out the open door, but there was no time to react since we were scooting closer and closer ourselves.  Before I knew it, Ashley and I were there and she said, “One, two, three, go!”  We jumped together out into the open sky.  The wind was strong and we were flying through the air.  I was checking the altitude gauge on my wrist that I had been instructed to keep an eye on.  At 7, 000 feet, I found the golf ball size pull for the rip code and at 6000 feet, I yanked it hard.  Up floated the parachute and yanked us to a stop from our freefall. We were suddenly floating through the air in complete silence with the checkerboard fields below as a backdrop.

Ashley let me steer the parachute and told me how to pull on one side to turn left, then the other to turn right.  We did a 180-degree turn just for the fun of it, followed by a 360-degree turn. We could see the other parachutes below us and then she pointed out the landing strip where another plane was taking off, and then the landing area where we were headed.  She instructed me to pull down hard on both cords as we neared the strip and to raise my legs so we could land on our bottoms.  We scooted right down in a near perfect landing with not even a bump.  It was as if we’d just slid down a very smooth playground slide.

At that point, exhilaration entered the picture.  I realized I had just jumped out of a moving plane, free-fallen through the sky and then landed with not even a plop back on terra firma.  Wow.

After a high-five exchange with Ashley followed by a hug, I looked around and saw that Ray was walking off the landing field with his instructor followed by my other plane mates.  We’d all managed to skydive successfully.  Not even any limping.

At this point several hours later, Ray and I are still congratulating ourselves and each other on a job well done.  The opportunity presented itself,  we seized it, and, as a result, we’ve both experienced something many people feel too nervous to even try.  I am feeling exceedingly happy that I had the chance to skydive.  So is Ray.  There is a moment when you just need to say a loud, “Yes!” and proceed. That’s where the fun is.

Here are a few photos:

Me in my gear 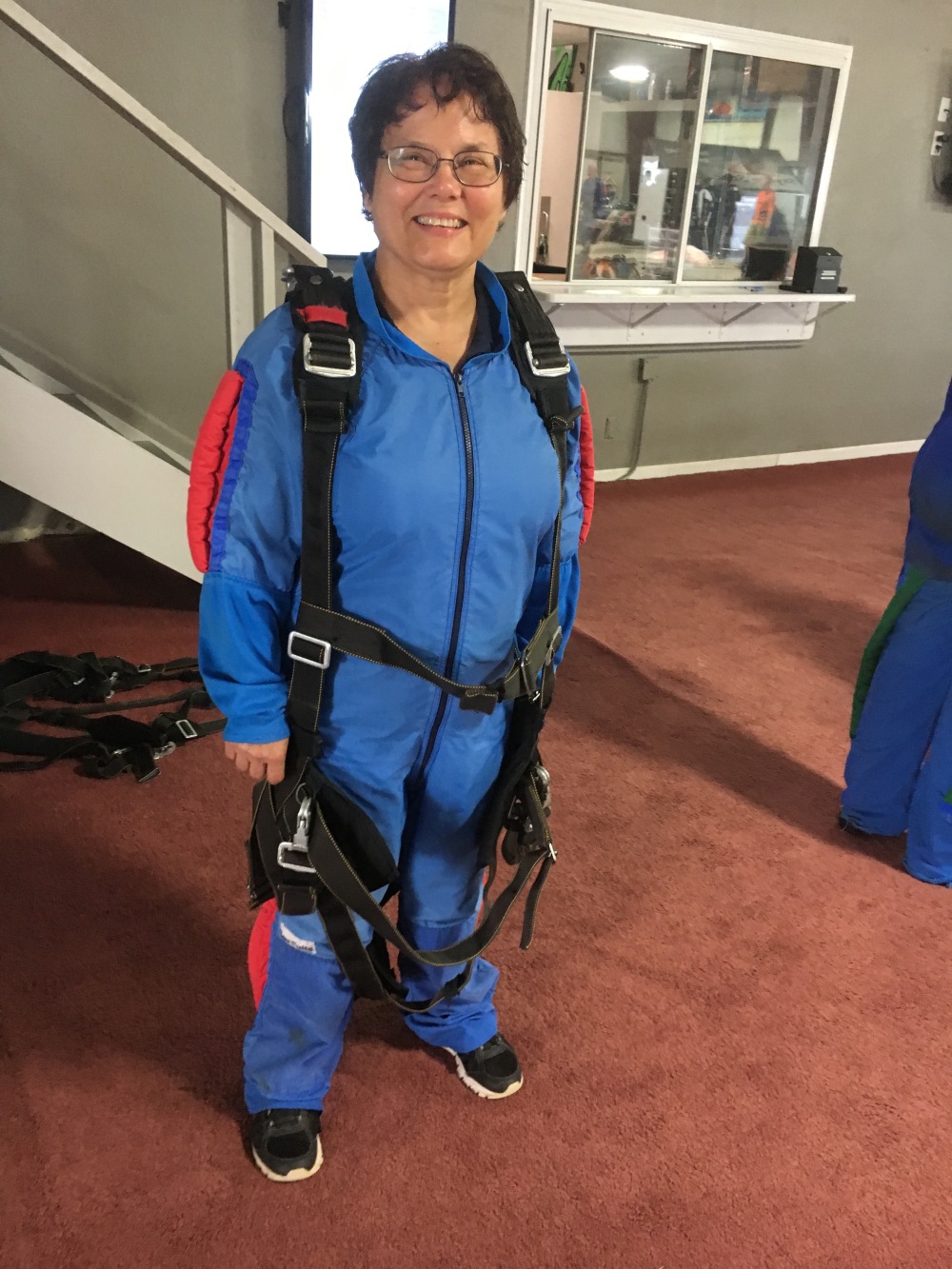 Len and Ashley Bringing Up the Rear