Today one of my students who I have had since he was in 2nd grade, David Bina, came to interview me for his class “Women and History.”  David is now a senior at the University of California, Santa Barbara.  He asked me to tell him stories about my family history and I told him many about both sides of my family.  I mentioned to him my maternal grandmother, Winnie Waugh, and told him details about her life.  It made me think of this piece I had written about my grandmother a while back.  I think this will fill in a few more details for David and, besides, it makes me happy to revisit my grandmother’s life. Here is the piece:

My grandmother Waugh was 4’10” tall and weighed around 210 pounds. She had a cane that she wielded like a weapon and a temper that made you keenly aware of that cane. Winnie Waugh was her name, Mary Winifred Blackmon Waugh, and her father had fled from Mississippi after a bar room brawl. Her father, the son of a plantation owner, hastily took his family to Texas just in case whatever happened in that bar didn’t send him off to jail.

My grandmother said they came in a covered wagon to Texas. She said they moved to West Texas where her father raised horses and she had a surrey with fringe on top.

My grandmother married Robert McLucky Waugh – a Scotsman – when she was 19 or 20. She was trained as a teacher and taught for several years.

My grandmother was the social service agency in her town long before there was such a thing. She gave food and clothes to the poor and helped transport women prisoners to the state prison. She was the PTA president the entire time my mother was in school and the head of the DAR for the state of Texas, even addressing the State Legislature.

“My father managed that coal mine when coal was king,” my mother said, “and we had more money than the bank president.” That is until coal lost its hold to natural gas. Unfortunately, this was just at the time that my grandfather bought his own coal mine.

Money grew tight and my grandmother added several apartments to her house during World War II, which people rented out. Somewhere during that time, my grandfather died of a heart attack.

My grandfather told my mother before he died that he would always be near her, no matter what. She told me the same before she died. And I will tell my children the same. A good family legacy.

My grandmother lived to be in her mid-90’s. She called her luggage “grips” and once she lived with us, she would sometimes come downstairs with her grips in hand, ready to catch the train back home. She was not happy when Mother told her that she would not be going that day.

Winnie Waugh had dentures she filled with pink cream to stay connected to her gums and she had big pink drawers that were like wide silky shorts. She walked with a slow heavy gait and she often pointed her cane when she wanted someone to do something for her.

My mother visited her dutifully once she went to the nursing home in our hometown and we all went to see her often. I still remember the smell of stale urine of that home and the old people sitting in wheel chairs with blankets over their laps. My grandmother was in bed by then, not out and about. She died finally in that home. My mother seemed relieved.

I understand my grandmother had been a powerful women, a good woman, a woman with vision. Unfortunately, she was too old by the time I came along for me to see that real Winnie Waugh. I only saw the waning woman, who by that time was tired.  Still, I am aware that I come from strong and sturdy stock, even if there was that fleeing from Mississippi. I also know that Winnie Waugh knew how to survive through the good times and the bad.  I’m glad to know that I carry part of her with me today. 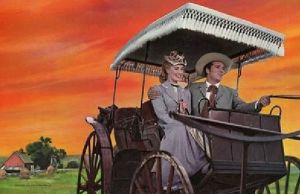