We (Ray, Liz, Ron and I) picked Rachael up at the airport tonight after her flight from Miami and went to Dinah’s Family Restaurant, located at 6521 Sepulveda Boulevard. This is a LA googie landmark, along with Pann’s Restaurant, and for those of you who watched The Big Lebowski, this is the diner that is featured in the movie.  Dinah’s has been around since 1959 and is famous for its oven-baked pancakes and fried chicken.  I had grilled chicken tonight with carrots and a baked potato and it was a solid meal at a reasonable price.  Ray had a turkey burger he said was excellent.

Rachael seemed pleased with her impromptu birthday dinner even though she was tired after a cross-country flight.  Still, I expect she, along with Liz and Ron, will be revisiting Dinah’s in the future.  Pann’s is my favorite googie restaurant, but this runs a close second.  I plan to try the fried chicken next time since it is supposed to be a special formula that doesn’t use oil.  Can’t wait.  Ron had it today and said it was really good.

I am happy Rachael is back in LA, safe and sound.  Happy birthday, little one. 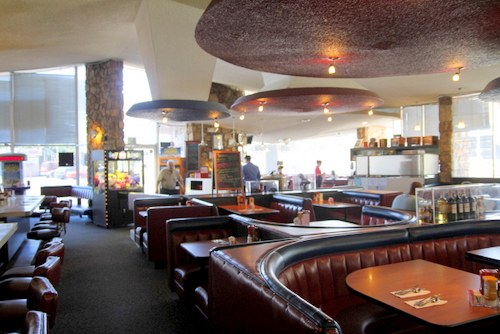