Here is the link:

I woke up this morning, replaying in my mind, the abject honesty of the essay Tennessee Williams wrote four days before the opening of “A Streetcar Named Desire.”  In this essay, Williams lays bare how disillusioned he felt three years before after the success of his play, “The Glass Menagerie,” and how barren his life was – how empty that material success was – since it removed the struggle for survival that had characterized his previous long and un-noteworthy writing career. Even the fancy hotel suite where he was living became a symbol of the emptiness of his existence.  When the arm of his sofa broke off, it was repaired without a word, a stain on that same sofa was removed without comment and no matter how loud his late night parties became there was nothing he could do to offend his neighbors or the hotel management. He began to doubt the sincerity of his long-standing friends and even spurned sincere praise for his play by well-meaning fans until he had an eye-operation, which required gauze to be placed on his eyes for a time.  That’s when he saw that the friends who he had doubted came dutifully to visit and a healing started to take place.  He went off to Mexico to escape any recognition and there saw that he could exist again just as one more human being in the world. After a time, he began to pen, “The Poker Night,” which would later become “A Streetcar Named Desire.” His final paragraph reads thus:

Ask anyone who has experienced the kind of success I am talking about-What good is it? Perhaps to get an honest answer you will have to give him a shot of truth-serum hut the word he will finally groan is unprintable in genteel publications.

Then what is good? The obsessive interest in human affairs, plus a certain amount of compassion and moral conviction, that first made the experience of living something that must be translated into pigment or music or bodily movement or poetry or prose or anything that’s dynamic and expressive—that’s what’s good for you if you’re at all serious in your aims.

Clearly, I don’t have Tennessee Williams’s problem related to success, but his honesty is what I find arresting. He lays himself completely bare on the page and isn’t afraid to share his deepest feelings. This is also true about this play. The characters are bare as well and displaying behavior that demonstrates how complex human beings are and how inaccurate surface appearances can be.

Laying oneself bare on the page, either in nonfiction or fiction, that is a goal worth striving to achieve.  Opening one’s heart and laying it out, letting fear fall to the wayside in the process.

I am afraid, but I see the value.  I can see if fear isn’t part of the scenario, then the delving no doubt hasn’t gone deep enough. 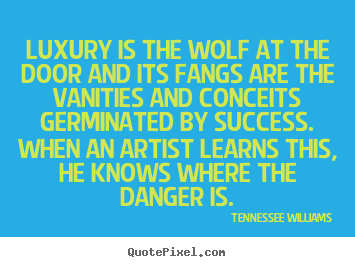