This photo was taken last Tuesday on Hillcrest Road in Beverly Hills immediately after Rachael, Ray and I voted in the national election. Ray is taking the photo. 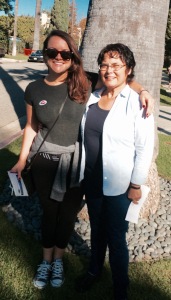 What you don’t know looking at the photo:

Since last Tuesday, I have gone through a grieving process, talked to a lot of people who were/are also grieving, watched national protests of the election results, learned that Hillary won the popular vote by over a million votes, and participated in a church gathering where many of our church members who are gay or transgender discussed their deep concerns about the potential loss of their rights under Trump.

I have also cooked and baked to supply comfort food for Ray and myself, have gone up to Ojai to see the Super Moon and have met with many students to continue work on their college essays that have a November 30/December 1 deadline.

I am proceeding with the belief that life is bigger than one election and a basic trust that we Americans know how to stand up and make our voices heard when we are unhappy. I have resolved to routinely contact my governmental representatives and let them know my thoughts and I am open to the idea of volunteering with organizations that reflect my beliefs related to climate change and equality for all. In other words, I am recognizing that I need to get more politically active.

Also, I am being honest about how I felt about my photo to publicly remind myself that my views on “fat” reflect an internalized message I have carried all of my life about what constitutes real feminine beauty. I pledge right now to combat those negative, small-minded ideas that continue to plague my self-esteem and recognize them for what they are – a marketing-based lie to women to keep all of us looking for that next new product to stave off weight gain and/or the aging process. I am tired of buying wholesale into that propaganda and resolve to stay on the alert for insidious invitations to buy back in.

That, my friends, is the rest of the story. A bit more than first meets the eye.