My husband said to me today, “Thank you for being so normal.”

I replied, “Thank you back.”

Not that we haven’t had our share of abnormal, which can be defined as having a need for major drama. There was a time when drama was a daily part of our life together. Fights, misunderstandings, hurt feelings. But after too many years and one too many fights our arguments went flat. Same old same old. Boring. Predictable. Completely uninteresting. We had succeeded in wearing each other out. It was mutual. We just yawned, went into separate rooms, distracted ourselves and came back when we had something more interesting to say.

That’s when life began for us. When we stopped looking for reasons to be upset, offended, disappointed. I trained myself to replace my negative thoughts with one simple line, “He’s a good man and he’s doing the best he can.” The second part of that thought was just as important, “I’m a good woman and I’m doing the best I can, too.” Over and over instead of the righteous indignation that had filled my mind for too long. And then the miracle happened: grace. I started seeing that he really was a good man and I really was a good woman and we might not always get it right, but we were committed to doing the best we could and that was good enough.

That’s when I turned my thoughts to more creative endeavors like writing and appreciating art and music. Maslow would say I moved up the hierarchy from getting my safety needs met to getting my psychological needs met so that I could eventually focus on my needs for self-fulfillment. I am still working on that process and, let me tell you, it beats the hell out of those lower needs when I felt unsafe and insecure.

Did we have to go through all those tough early years? I suppose the answer for us is yes. I don’t know why. Some people seem to know how to operate more easily with each other than we did when we were younger. It was as though we both had a need to push the other as far away as possible to prove that we truly weren’t worth loving. And the other stayed anyway. Stayed put. Held on. Didn’t leave. Dug in and said, “Sorry, not going.”

That is in itself a miracle since we made it easy on the other to have good reasons to leave. But we didn’t.

Instead, we both settled into normal, which might be the nicest compliment one can receive.

Who knew normal could feel so good?

I’m glad I finally do. 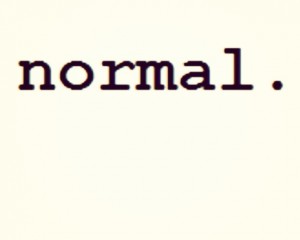