Ray now has a fever. We’re hoping that it is from the sunburn that came from being out in the sun today up in Ojai. We certainly don’t want it to be coming from some lung infection. I think we’ll know more tomorrow since a typical sunburn fever will last only through one night. He is up in bed with Vick’s VapoRub slathered all over his chest. I can hear him coughing up there. I won’t write for a long time since I’ve been out all evening at my stained glass class with Liz and her boyfriend, Ron. Ray was supposed to take the class, but so far hasn’t made it since he’s been out-of-town and then last week at the symphony. Ron is getting the gift of that class so far. Very nice for Ron and I think Ray is okay with that, too, since he knows a lot about stained glass from past experience.

On an entirely different subject, I’ve decided to make the Episcopal Relief and Development Lenten Studies 2016 handbook be my Lenten practice this year. I will read a passage every day and think about it. I may even write about some of those passages or thoughts here on my blog. But I will read the passages. I think that’s a good addition to my day and might spur decent contemplation. If any of you are interested in this, then here’s the link to the handbook. It is in PDF form and can be downloaded onto your computer. Let me know if you’re thinking of doing it. It’s always nice to have company for these sorts of things.

Okay, I must go up and check on my husband. I said hello and left him to finish the end of an episode of Foyle’s War, which, by the way, is first-rate. British detective series set in World War II. Excellent.

I hope you are well on this Mardi Gras evening. Lots of folks were celebrating over in West Hollywood tonight at the clubs. I saw them as I drove back from my class.

Here’s to life in general! 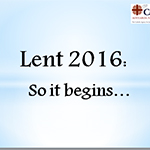