This morning Ray and I got up at 5:30 and went to cook breakfast for the needy at St. Thomas the Apostle Episcopal Church, Hollywood. When we arrived at 6, the lights were all off in the parish hall and there were two homeless men waiting outside for our arrival. As we walked up, one said, “I’m here early to help you set up this morning.”  He went in and promptly began setting up tables and chairs in the big hall. The other man helped him.  Ray and I surveyed what food we had, made a breakfast plan and then he headed off to Smart and Final to buy whatever food we didn’t already have.

I started working on a bread pudding, which included big chunks of white cake with vanilla buttercream frosting that had been donated by a local food bank. Shortly after, our sexton Eddie arrived, who went to work on all the final details for getting ready to serve a large breakfast. By 7 am, Bob and Ben (two of our mainstay volunteers) and their two little nephews arrived. Shortly after, Candace – a friend of B & B’s arrived, plus an adorable older couple originally from Lebanon.  We were set. No problems now. We had plenty of people to makes everything for our breakfast, which today included scrambled eggs, corn beef hash, heated mini-hamburgers, pork dumplings, bread pudding, canned peaches and lemonade.  We buzzed around doing our jobs and making sure everything was out on the serving tables by 8 am.

In the meantime, we had fifty or sixty diners arrive for a solid hot meal with coffee.

Let me just say, if you’re feeling the way I’ve been feeling lately – a bit discouraged and upset by the national news – then find a way to help those who are less fortunate than you are.  I had one man come up and say, “Thank you for your beautiful smile,” another express gratitude for the delicious food and a woman grin at me and say, “I’m so happy to see you!”  I had a long discussion with one table of well-informed and concerned diners about our current immigration policy and promised another diner that I would put his gift (a CD) in a safe place for one of our volunteers who couldn’t come today. (That same man gave me my own CD just a few weeks ago: Janice Joplin’s Early Performances since he knows I’m from Texas.) One young man came up at the end of the meal and offered up a blessing for our good works, praying for all the volunteers to have a positive upcoming week.

The woman volunteer from Lebanon told me that she and her husband moved to the US in the 1980s because they are Christians and it was not safe for them to live in Beirut. “I am blessed to be here this morning,” she said, as we filled up to-go containers for those who needed more food for later in the day. I felt my heart lift from all the goodwill around me. “Me too,” I said. “Yes, me too.”

In other words, today I received a good deal more than I gave and I walked out the door feeling a lot better about the generous spirit of human beings.

I believe in the basic goodness of people and our shared concerns regarding the world around us.  I trust these qualities will keep us grounded in our common humanity and help us rise above our divisions. We all want the same things, after all – a warm meal, a safe place to sleep, kindness, a sense of connection and a little hope. 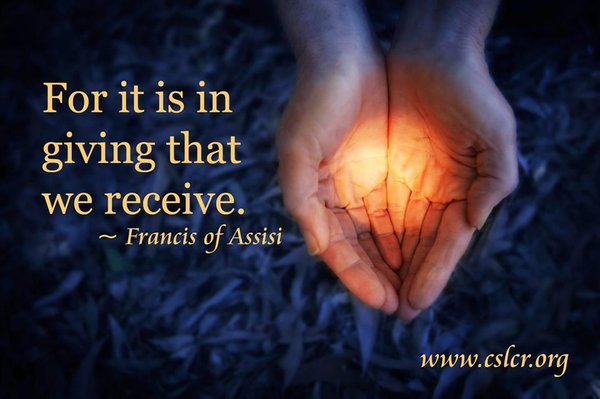